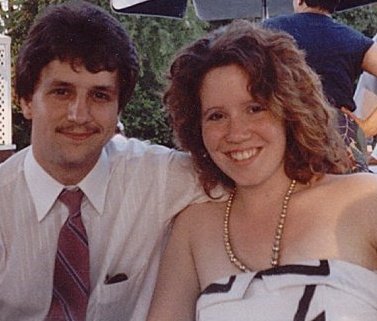 It was 80’s week on Facebook last week and we were asked to post pictures of ourselves from that hilarious decade. Do any of you remember the Aqua-Net fog in the girls locker room? I still have hair big enough to have its own zip code. My scanner isn’t working, but I do have a picture of my sweetie and I at a wedding in Chicago, 1989.

We met in October of 1988 — he worked in Customer Service at Sprint-United and I worked in IT. He spilled coke on his keyboard and I replaced it with an apparently defective refurbished keyboard. He swears I did that on purpose. Poor man asked me out several times and one day I finally told him that “I don’t normally date men I work with.”

His response?  “That’s okay because I’m not normal.”

We went on our first date on December 3, 2008 — He took me to a really fun pizza place, off  Touhy and Dempster in Chicago and then to a comedy club. We’ve been together ever since and he is still my favorite man on the planet.